Back to Projects
Mackay Ring Road

We have delivered an improved link from the south to the northern suburbs to reduce traffic through Mackay.

We have constructed a new 11.3km ring road route which connects the Bruce Highway at the Stockroute Road roundabout in the south through to Bald Hill Road in the north.

The community was invited to make naming recommendations for the key infrastructure on the Mackay Ring Road, including the Pioneer River Bridge, Lagoon Creek, Fursden Creek and Fursden Creek overflow.

These recommendations were first assessed by TMR to ensure they satisfied mandatory criteria informed by TMR's naming infrastructure principles. If successful, they progressed to a volunteer naming committee who assessed the names, considering how well they reflected the identity and character of the Mackay region, and the historical and cultural significance of the name. The naming committee shortlisted names for decision by the Minister for Transport and Main Roads. The bridge names are:

Lagoon Creek – Margaret Insch Bridge
Margaret ‘Granny’ Insch was an early settler in the Pioneer Valley who arrived in Mackay from Scotland in 1883. As a midwife, Margaret delivered 99 babies in the Pioneer Valley area at a time when the birth and infancy death rate was quite high. At times, she crossed flooded rivers and creeks in the middle of the night to treat those in need.

Fursden Creek – William and Frank Guthrie Bridge
Recognising the contribution of William Guthrie and his brother Frank who came to Mackay after the 1918 cyclone and built some of Mackay’s most well-known buildings including the Queensland National Bank, the old Pioneer Shire Council Building and the Mackay Masonic Template – all of which are registered on the Queensland Heritage Register.

Fursden Creek Overflow – Thomas Powell Bridge
Known for his work and leadership in the sugar cane industry in the early 1900s, Thomas Powell helped to support and improve conditions for local growers.

The Mackay Ring Road crosses several waterways. To reduce flood impacts on the region 4 new bridges and 9 overpasses were built. The 670m Pioneer River crossing is the largest bridge structure built on the Mackay Ring Road. This crossing creates a vital connection between the north and south of Mackay.

A 1.16km duplication of the Peak Downs Highway, between Horse and Jockey Road and Sextons Road, is included as part of the Mackay Ring Road project.

The upgrade allows for the integration of the new Peak Downs Highway overpass, with a clearance height of 5.5m, and an on-ramp and off-ramp.

A feature of the upgrade is the construction of a shared bicycle/pedestrian pathway.

We partnered with the Department of State Development, Manufacturing, Infrastructure and Planning to consult with local businesses and communities to maximise the opportunity for local content on the project.

The Mackay Ring Road Supply Chain Development Program provided interested companies with the tools and information required to increase their chances of securing work, not only on the Mackay Ring Road project but also to develop their business to meet the needs of Tier 1 construction companies in the future.

Central Queensland workers from varied industries, including manufacturing, transportation, crane, supply and production, displayed their capabilities on the project.

An example is the manufacture, transportation and placement of 108 T-girders on the new Pioneer River crossing. Each T-girder, weighing up to 82 tonnes, measuring 1.8m-tall and 35m long was created in a specialist precast concrete facility in Rockhampton. Regional and local workers then transported each of the 108 T-girders the 33km between Rockhampton and Mackay, using pilot escorts.

Local content has been a major achievement on the project. In early 2020, more than $152 million worth of packages had been let to local and regional suppliers and nearly 1700 people had been inducted on site

It’s 11.3 kilometres of highway. The purpose of it, is to get traffic off the existing Bruce Highway at Nebo Road, provide better connectivity to the port and the industrial areas of Mackay and also connection to the west on the Peak Downs Highway, to the Bowen Basin

Caption: The project is being delivered as part of the Bruce Highway Upgrade Program. Funding for Stage 1 of the Mackay Ring Road is $497.3 million

It cuts out around 10 sets of traffic signals in the Mackay area. It also means that all the freight transport moving north and south along the Bruce Highway doesn’t have to enter into the Mackay CBD area.

13 structures across the project, they go over a variety of cane rail, local roads, Peak Downs Highway, the Pioneer River.

Over 70 per cent of our suppliers and sub-contractors actually come from either Mackay itself or from the region.

The majority of our suppliers are local here, whether it’s quarry material, embankment fill, concrete supply, all that sort of stuff is building the economy here in Mackay.

You know, the community is embracing it, they are learning about it, we find people are interested in the job. They don’t actually understand the scale of the job. They’re like "Wow, we didn’t realise it was that big."

When people move to Mackay to build an infrastructure project like this, those economic benefits flow through to the community. Whether it’s people renting houses, people shopping at the local supermarket, all that sort of thing is something this project delivers.

Caption: Works are due to be completed on the project by mid-2020 If you have any concerns during construction contact CPB Contractors directly.

We are committed to supporting the environmental and cultural heritage. Construction is underway to upgrade the Bruce Highway and major intersections north of Mackay, to reduce congestion and improve traffic flow in critical areas. 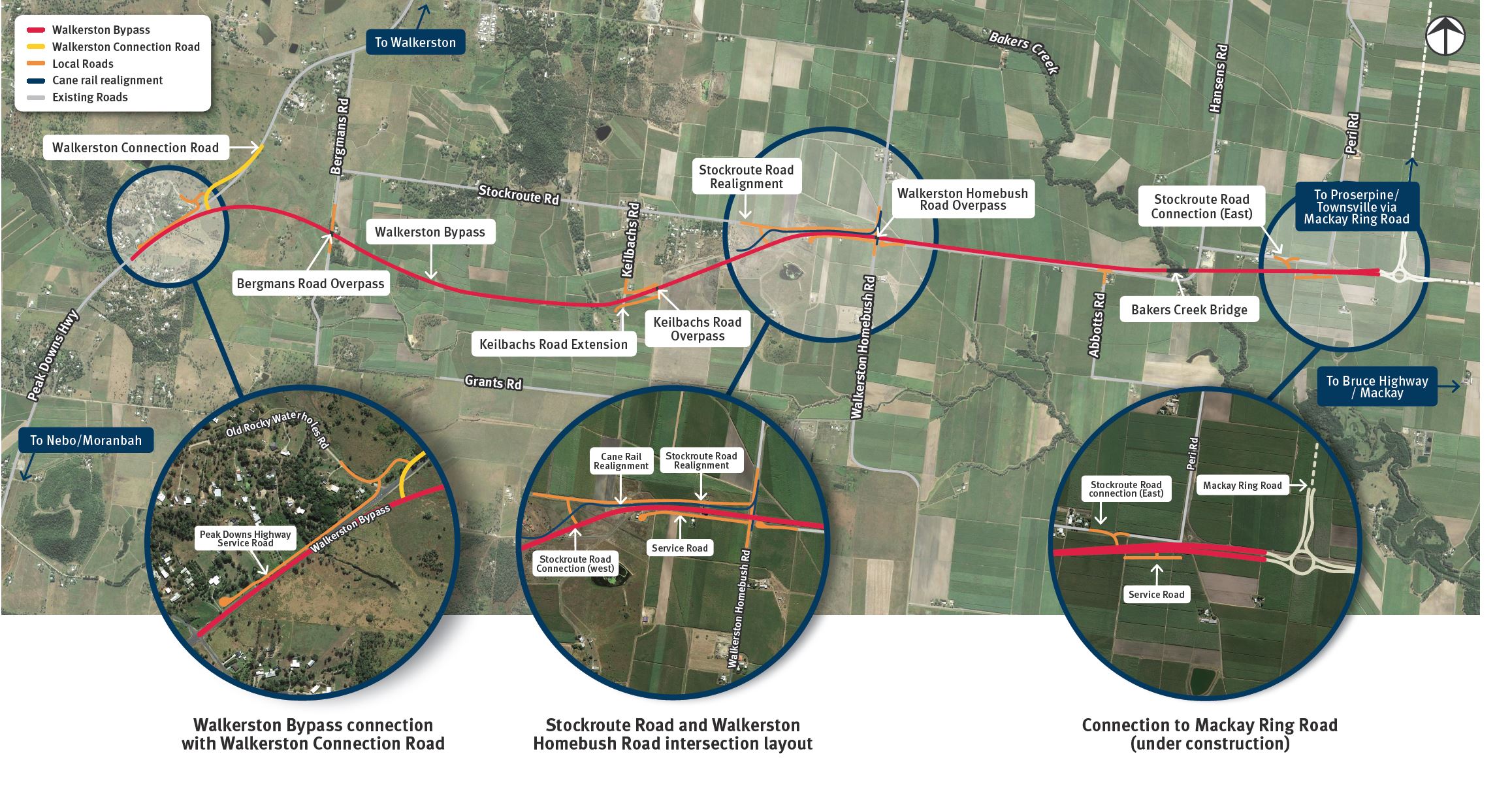 The Walkerston Bypass will deliver a new 2-lane rural highway to connect Peak Downs Highway west of Walkerston to the Mackay Ring Road near Paget.